Systematic errors are unexpected deviations from the intended detection protocol. If these systematic errors are accurately evaluated, in theory, they can be compensated by post experiment data processing. If not, they result in a particular type of measurement uncertainty, typically referred to as systematic noise.

Noise due to Data Acquisition

The detector (sensor), which is a type of transducer, is a device that converts a physical property into a corresponding electrical signal. An acquisition system to measure different properties depends on the detectors that are suited to detect those properties. Signal conditioning may be necessary if the signal from the transducer is not suitable for the DAQ hardware being used. The signal may need to be filtered or amplified in most cases. Various other examples of signal conditioning might be bridge completion, providing current or voltage excitation to the sensor, isolation, linearization. For transmission purposes, single ended analog signals, which are more susceptible to noise can be converted to differential signals. Once digitized, the signal can be encoded to reduce and correct transmission errors. Data acquisition involves gathering signals from measurement sources and digitizing the signals for storage, analysis, and presentation on a PC. Data acquisition systems (a.k.a. DAS or DAQ) convert analog waveforms into digital values for processing. The device we will be using utilizes this process. Once connected to the computer via the shielded cable, we will be able to either send analog signals into the device (using a Wavtek generator) which can then be viewed on the PC itself, or generate a signal from the device itself and manipulate the values through the use of the Measurement & Automation Explorer.

A noise signal is typically considered as a linear addition to a useful information signal. Noise is a random process, characterized by stochastic properties such as its variance, distribution, and spectral density.

In discrete time, white noise is a discrete signal whose samples are regarded as a sequence of serially uncorrelated random variables with zero mean and finite variance; a single realization of white noise is a random shock. Depending on the context, one may also require that the samples be independent and have identical probability distribution (in other words independent and identically distributed random variables are the simplest representation of white noise).[3] In particular, if each sample has a normal distribution with zero mean, the signal is said to be additive white Gaussian noise.[4]

The samples of a white noise signal may be sequential in time, or arranged along one or more spatial dimensions. In digital image processing, the pixels of a white noise image are typically arranged in a rectangular grid, and are assumed to be independent random variables with uniform probability distribution over some interval. The concept can be defined also for signals spread over more complicated domains, such as a sphere or a torus.

White noise is the generalized mean-square derivative of the Wiener process or Brownian motion.

A generalization to random elements on infinite dimensional spaces, such as random fields, is the white noise measure. 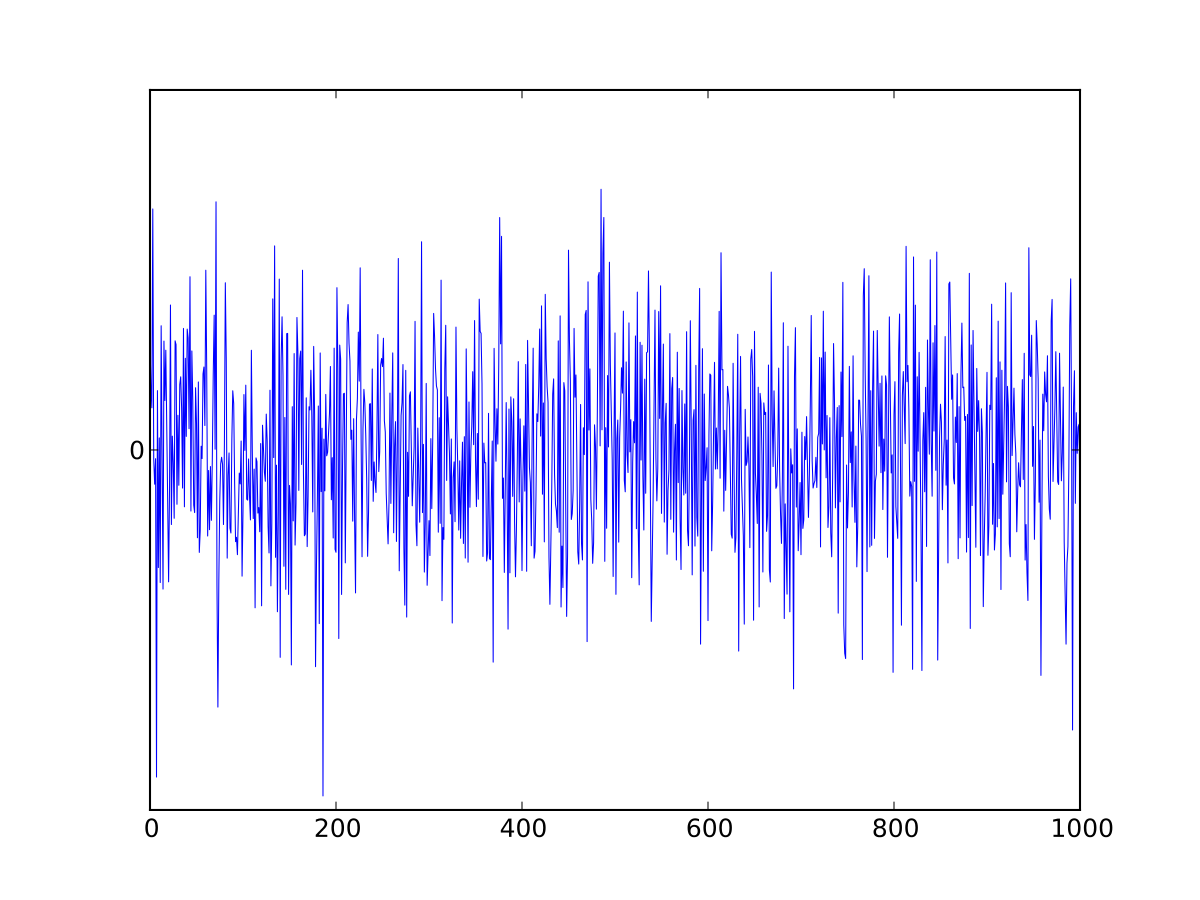 Different types of noise are generated by different devices and different processes. Thermal noise is unavoidable at non-zero temperature (see fluctuation-dissipation theorem), while other types depend mostly on device type (such as shot noise, which needs a steep potential barrier) or manufacturing quality and semiconductor defects, such as conductance fluctuations, including 1/f noise.

Johnson–Nyquist noise (sometimes thermal, Johnson or Nyquist noise) is unavoidable, and generated by the random thermal motion of charge carriers (usually electrons), inside an electrical conductor, which happens regardless of any applied voltage.

Thermal noise is approximately white, meaning that its power spectral density is nearly equal throughout the frequency spectrum. The amplitude of the signal has very nearly a Gaussian probability density function. A communication system affected by thermal noise is often modeled as an additive white Gaussian noise (AWGN) channel.

Shot noise in electronic devices results from unavoidable random statistical fluctuations of the electric current when the charge carriers (such as electrons) traverse a gap. If electrons flow across a barrier, then they have discrete arrival times. Those discrete arrivals exhibit shot noise. Typically, the barrier in a diode is used. Shot noise is similar to the noise created by rain falling on a tin roof. The flow of rain may be relatively constant, but the individual raindrops arrive discretely.

The root-mean-square value of the shot noise current in is given by the Schottky formula.

where I is the DC current, q is the charge of an electron, and ΔB is the bandwidth in hertz. The Schottky formula assumes independent arrivals.

Vacuum tubes exhibit shot noise because the electrons randomly leave the cathode and arrive at the anode (plate). A tube may not exhibit the full shot noise effect: the presence of a space charge tends to smooth out the arrival times (and thus reduce the randomness of the current).

Conductors and resistors typically do not exhibit shot noise because the electrons thermalize and move diffusively within the material; the electrons do not have discrete arrival times. Shot noise has been demonstrated in mesoscopic resistors when the size of the resistive element becomes shorter than the electron–phonon scattering length.

Flicker noise, also known as 1/f noise, is a signal or process with a frequency spectrum that falls off steadily into the higher frequencies, with a pink spectrum. It occurs in almost all electronic devices and results from a variety of effects.

Burst noise consists of sudden step-like transitions between two or more discrete voltage or current levels, as high as several hundred microvolts, at random and unpredictable times. Each shift in offset voltage or current lasts for several milliseconds to seconds. It is also known a popcorn noise for the popping or crackling sounds it produces in audio circuits.

Signal-to-noise ratio is a measure used in science and engineering that compares the level of a desired signal to the level of background noise. SNR is defined as the ratio of signal power to the noise power, often expressed in decibels. A ratio higher than 1:1 indicates more signal than noise.

Transducers can be categorized by which direction information passes through them:

Some specifications that are used to rate transducers

This website uses cookies to improve your experience while you navigate through the website. Out of these, the cookies that are categorized as necessary are stored on your browser as they are essential for the working of basic functionalities of the website. We also use third-party cookies that help us analyze and understand how you use this website. These cookies will be stored in your browser only with your consent. You also have the option to opt-out of these cookies. But opting out of some of these cookies may affect your browsing experience.
Necessary Always Enabled

Any cookies that may not be particularly necessary for the website to function and is used specifically to collect user personal data via analytics, ads, other embedded contents are termed as non-necessary cookies. It is mandatory to procure user consent prior to running these cookies on your website.